Since 2019, Charlotte’s vegan food truck scene continues to grow. While having pop-ups are great, seeing actual vegan food trucks just feels more substantial. There may be locations listed below, but with food trucks, it is always best to double check their social media to confirm where they will be.

Sun Burger
Sun Burger has been on the Charlotte vegan scene for a long time with pop ups, but upgraded to a food truck in March 2019. They offer weekly meal prep and delivery service as well as weekly service at The Spoke Easy from 1-5 pm on Thursday through Sunday.
Instagram: @sunburgervegancuisine 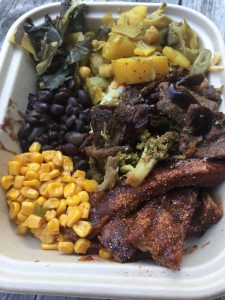 Vegan food on the go. They’ve become a staple at Pilot Brewing for Taco Tuesdays, but can be found around the Charlotte region. They have a rotating menu featuring beef tips, fried chik’n, cauliflower wings, and loaded nachos.
Instagram: @ve_gofoodtruck

Showing up at breweries around town, they offer a variety of bowls, hashbrown, and sandwiches like the Shroomin’ Philly.
Instagram: @soulminersgardenfoodtruck

Another newcomer in 2020, they have a chili mac n cheeze bowl that looks amazing.
Instagram: @macdvegan

One of the OGs of the Charlotte vegan scene. After they left their University location, they reemerged as a food truck. While not always letting people know on their social media, they are still showing up around town.
Instagram: @zizisvegan2go

Sort of around…you can sometimes find one of their menu items at Bahn Mi Brothers.
Instagram: @ricoqui2020

Vegan Rich now has a food truck and has been showing up at the farmer’s market with their Jamaican inspired dishes. The most recent menu had kebabs, burgers, and jerk spare ribs.
Instagram: @veganrich_clt

You wouldn’t think My Sausage Buddy would offer any vegan options, but they do have one:  Vegan Italian. At the time we tried it, they were using Field Roast. The owner mentioned having attempted to make his own vegan sausage, but wasn’t able to perfect one yet. Solid enough option when you’re at a brewery and need a bite.
Instagram: @mysausagebuddy